Your Guide to the 3D Camera and How it Works

Photo technology has evolved drastically over the years, thanks to the rapid evolution of new tools for capturing images and light. These days, we can create fully immersive experiences with an app on a smartphone and capture lifelike pictures with unprecedented resolution levels. Even your average iPhone or iPad can take a pretty high-quality image these days.

The 3D camera is a concept that a lot of people have heard of these days, but many people still don’t fully understand. It’s easy for those pursuing the 3D camera market to get lost in descriptions of things like 3D depth perception and 360-degree photos. However, once you get to know how a true 3D camera works, you’ll also see why these tools are growing so popular.

Here’s your guide to the world of 3D photography.

What is a 3D camera?

Let’s start with the most obvious question. 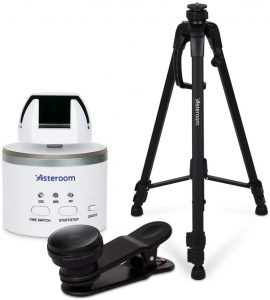 The 3D camera started life as something called a stereo camera – an imaging device that can capture multiple points of view from various camera lenses. With 3D scanning of an area from various perspectives, it’s possible to create depth perception in photographs where people or objects appear to be almost coming out of the page.

With the right 3D photography, you can capture an immersive point cloud in time and transform it into a 3D image that seems almost real enough to touch. The technology behind this effect is stereoscopy, which is why you’ll often hear 3D photo capture referred to as stereoscopic imaging.

Today, old-fashioned monochrome camera devices capable of 3D capture are quickly being replaced by vibrant color products that can collect images in a much higher resolution. There are apps and hyper-accurate 3D depth sensors in smartphones, drones, tablets, and more. It’s even possible to combine 3D camera technology with light and machine vision to create 3D video for AR technology and mixed reality experiences.

History of the 3D Camera

The 3D model for photography might sound like a new concept, but it’s actually been around for a lot longer than you’d think. The first 3D camera came from the mind of a man named Chris Condon, the founder of StereoVision. He invented a host of 3D camera lenses with the support of his partner Allan Silliphant and eventually received a patent for the world’s first 3D Motion picture lens.

The early 3D cameras of the 60s and 70s were used to create the powerful 3D scene technology in some of the first 3D movie experiences we ever had. The technology could create footage that made it seem like an object was coming out of a theatre screen or a 3D TV.

The initial 3D camera is based on a standard camera design, which uses light through an enclosed box and a special lens to record an image on a light-sensitive medium. The main difference with 3D technology is that it’s possible to capture images from multiple perspectives and splice them together using ambient light and structured light.

Difference Between a 3D Camera and a 360-Degree Camera

There are many different kinds of camera technology out there, from single lens cameras to a hyperspectral camera, single DMD, or stereo camera (the 3D camera).

One of the most common areas of confusion for people interested in 3D cameras is how they differ from 360-degree cameras, or the cameras that can capture 3D space with depth recording. The main difference between a 3D camera and a 360-degree camera is the immersion factor.

3D cameras capture depth in a way that’s very similar to how our eyes function. We can see subjects and images in multiple dimensions of height, width, and depth through multiple angles and perspectives. Just as we use our eyes to perceive depth and distance in the things around us, 3D cameras capture the depth in a similar experience, giving more scope to an image.

360-degree cameras or the omnidirectional camera have a full 360-degree field of view, which allows them to feature an entire scene in a single image. The 360 degree camera immerses the viewer in the center of the image, with visuals on all sides, captured from every angle. This kind of technology is common in mapping technology and robotics applications where people need a complete view of an entire space.

Some newer smartphone and tablet devices can take photos and videos in their own 360-degree mode by asking the user to simply move the camera very carefully in a circle to get a 360-degree view. Intelligent technology in the camera then combines multiple images into one full panoramic view.

How do you take 3D photos?

There’s more to taking a 3D photo with a true 3D camera than you’d think. The key to success with 3D spectroscopy is getting the proper depth for your images. This means that you need to keep the zero parallax, foreground, and background in mind at all times.

The foreground is the thing in the image that you want to appear closest to the viewer. The background is behind the foreground in the 3D content, and the zero parallax is the screen or default zone at the top of the picture. When taking 3D images, photographers need to capture their image from multiple perspectives and use an app or tool later to combine the different perspectives. There needs to be a significant amount of divergence between each element in the image.

In other words, it needs to look as though your foreground is closer than your background. 3D camera photographers can accomplish this using a specific lens, a different light source, and special 3D applications. Most of the time, photographers either use a specialty lens to automatically convert images into 3D or mount two cameras, like the Leica blk360, beside each other to create 3D content.

As the demand for immersive imagery grows, the more the global 3D camera market continues to produce powerful tools to assist with capturing depth in photography.

Are there different kinds of 3D images?

The technology you use with your 3D camera will often dictate what kind of image you can create. You might have seen various kinds of 3D pictures already, such as the anaglyphic image. This is the technique that most companies still use to create 3D movies. The specialty lens allows you to see two identical images at the same time, one with each eye. The viewer gives the image the illusion of additional depth.

There’s also the autostereogram, with its complex kind of 3D image that you can only look at using a special technique called Auto 3D Imaging. Because it’s screen-based, you don’t need special glasses to view this kind of 3D image, but you will need a screen with a high resolution and an appropriate app for viewing the content.

What can you do with a 3d camera?

Groups worldwide are beginning to recognize the potential of 3D camera technology for a variety of purposes. For instance, in the VR and XR environment, 3D cameras could capture more realistic motion and depth in an avatar’s face. This would allow for the creation of better augmented and virtual reality experiences. Other potential users for the 3D camera include:

The Power of 3D Cameras

3D cameras and the app technology that come with them are already yielding impressive results, not just in the media landscape but also in the broader environment. For instance, companies use 3D imaging for everything from intelligent supply chain and logistics management to creating avatars for the VR and AR world.

As technology and the visual world continue to evolve, there’s no doubt that the demand for 3D cameras will continue to grow.